Share a memory
Obituary & Services
Tribute Wall
Read more about the life story of Herman and share your memory.

On Monday, December 14th, 2020, Herman Wadsworth Hemingway passed away peacefully with his loving family by his side after a brief illness. He was predeceased by his beloved wife, Barbara Bernice King Hemingway and his daughter Angela Hemingway. He is survived by his loving daughter, Myra Hemingway. He was the proud grandfather of Amarachi, Alanna, and Amaechinna “Mimi” Iwuh.

Herman was born on February 11, 1932, in Boston, Massachusetts to Martha and Herman Hemingway, Sr.  He is survived by his brother, Stephen Hemingway of Woolwich, Maine, and his sister Brenda Thomas of Schenectady, New York.  He leaves behind his beloved nieces Nicole Thomas, Ann Hemingway, and Sarah Hemingway, his nephew Mathew Hemingway, and numerous cousins.

Herman grew up in Roxbury and attended Roxbury Memorial High School for Boys. At the age of 15, he joined the NAACP Youth Council where he  developed his passion for social justice activism. A natural born leader and academic, Herman graduated as president of his high school class, and received full scholarship offers from Harvard University, Boston College and Brandeis University. He chose Brandeis because he thought it was innovative and exciting and majored in Near Eastern and Judaic Studies.

During his time at Brandeis, Herman chartered the Brandeis chapter of the NAACP, was an inductee in the Sigma Chapter of Alpha Phi Alpha, Inc. Fraternity, as well as a “line brother” to civil right leader, Dr. Martin Luther King,

Jr.  Together, they were inducted into the Alpha Phi Alpha Fraternity with six line brothers in June of 1952.  He received his bachelor’s degree from  Brandeis in 1953, and was the first black man to matriculate from Brandeis.  In 2005, Herman received a Lifetime Achievement Award from the Alpha Phi Alpha Fraternity, Inc., for his commitment to social justice and his impact on the African American community through education, activism and community service.

Upon his graduation from Brandeis, Herman was drafted to the U.S.

Air Force and served four years as a statistician. During his time in the military, he and his fellow black colleagues experienced severe racism and bigotry, which led to Herman’s pursuit of a career in law. He realized that in order to obtain the tools to dismantle institutional racism and poverty, he would have to learn about the legal system. Herman received his Juris Doctor from Suffolk University Law School in 1961 and embarked upon his career in public service and social activism.

He began his career as a public defender for the Roxbury and Chelsea District Courts and built a reputation as a strong advocate which allowed him to ignite systemic change by serving as a liaison between the people and the city government.  Herman then went on to open his own law practice, focusing on Civil Rights and uniting the Boston community together by providing solutions for issues related to housing, education, and government programs. He served as an acting administrator of the Boston Housing Authority. In 1968, Herman was appointed by Mayor Kevin White to be Assistant Commissioner of Housing Inspection for the City of Boston.

Herman served on several organizational boards during the course of his career including:  The Roxbury Boys and Girls Club, the Roxbury YMCA, the Association of Constitutional rights of Spanish Speakers. He served as chair on the Committee on Disadvantaged and Poor for the National Commission on Mental Health and was an arbitrator in the American Arbitration Association. He founded the Street Lawyers Program, a program that educated young urban students about the legal system. Herman was one of the contributors in the creation of the Boston Housing Court and the Boston Human Rights Commission.

Herman became a community research fellow at MIT during the early 1970s where he had an opportunity to conduct research about issues relating to social justice and inequality in the community.  In 2006, MIT later awarded him with the Department of Urban Studies and Planning Community Fellows and Reflective Practice Alumni Award.

In the mid 1970s Herman relocated with his family to Nigeria and served as a senior lecturer at Ahmadu Bello University in Nigeria for several years. During that period, he had the opportunity to lecture about the American Legal System in several other countries including Ghana, Senegal, Namibia, Cameroon, Mali, Canada, and Norway.

Herman was appointed chair of Boston State College’s Public Service Department and later became a senior fellow at the University of Massachusetts/Boston McCormack Institute and a tenured professor and chair of the Criminal Justice Department.  In efforts to ameliorate relations with law enforcement, Herman was known to invite officers into his lectures to promote understanding and create a healthy dialogue with the communities that they served.  In 1991, he received an Intelligence Data, Inc., award from Drop-A-Dime/Report a crime for his valuable contribution to crime prevention in Boston. He became a  Professor of criminal justice at UMass Boston and an adjunct professor at the Boston College School of Law and Boston University School of Law.  After 23 years of teaching at the University of Massachusetts/Boston, he had the honor of being appointed professor emeritus.

In 1994, The Supreme Judicial Court awarded Herman a certificate of appreciation for his outstanding accomplishments and contributions as a member of the Commission on Juvenile Justice. Herman was appointed by Governor Mitt Romney to be a member of the African American Advisory Commission in 2006.

Outside of his penchant for activism, Herman was a true renaissance man who had an affinity for words and the arts and enjoyed writing poetry and prose during his leisure time. He was an artist who enjoyed painting in oil and watercolor. He enjoyed spending time between his vacation homes in Sherbrooke, Quebec and Sarasota, Florida with his wife Barbara and hosting friends and family. Herman also enjoyed theatre and the arts, often reciting works by play writers such as Shakespeare, Lorraine Hansberry and August Wilson. He was fond of the saxophone and taught himself how to play when he was in his 70s. Herman lived and traveled to many countries in the West and Northern and Sub-Saharan Africa and explored European countries including Denmark, Norway, Belgium, Italy, and Switzerland building life-long friendships along his journeys.

Herman W. Hemingway will be remembered for his commitment to living a life of integrity and purpose, and his pursuit of justice for all.

To send flowers to the family or plant a tree in memory of Herman W Hemingway, please visit our floral store. 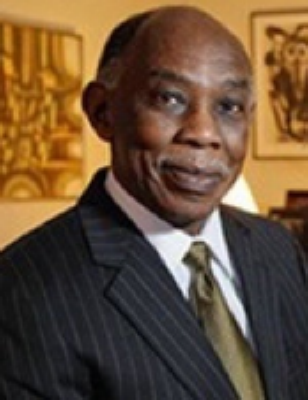