Share a memory
Obituary & Services
Tribute Wall
Read more about the life story of Esther Cooper and share your memory.

Esther Cooper Jackson is a longtime social activist who has been a crusading editor, a pioneering civil rights leader, and an important resource for scholars, journalists, and filmmakers.

For 25 years (1961-86), Mrs. Jackson served as managing editor of Freedomways: A Quarterly Review of the Freedom Movement. The influential journal chronicled, analyzed, and, indeed, celebrated the struggles of African Americans and other peoples of color to overcome oppression, prejudice, and injustice. The journal acted as a political, cultural, and moral compass for social activists, attracting contributions from a wide array of socially conscious scholars, writers, and artists, as well as from prominent civil rights and African liberation leaders. On its pages could be found speeches by Dr. Martin Luther King Jr. and President Kwame Nkrumah of Ghana; essays, poems, and short stories by James Baldwin, Langston Hughes, Ossie Davis, Ruby Dee, Gwendolyn Brooks, Sterling Brown, Alice Walker, Paule Marshall, and June Jordan; and illustrations by Elizabeth Catlett and Jacob Lawrence, among other examples.

As former NAACP Board Chairman Julian Bond wrote in the foreword to Freedomways Reader: Prophets in Their Own Country, a collection of writings from the journal:

"Contributors to Freedomways were distinguished by the high level of discourse they brought to their written work and also by their militant activism - these were writers with picket signs as well as pens in hand, scholars whose classrooms were the union halls, students who took instruction in the cotton fields or lunch counters, artists who brushed consciences as well as canvasses."

Mrs. Jackson's instrumental role in founding and nurturing Freedomways was just one measure of her social activism. Two decades before the birth of the journal (from 1940-47), she had served as executive secretary of the Southern Negro Youth Congress, an organization that foreshadowed many of the civil rights efforts of the '60s led by Dr. Martin Luther King Jr. and the young stalwarts of the Student Nonviolent Coordinating Committee ("SNCC").

She and her husband James E. Jackson Jr. were among the young black radicals who helped to found the Southern Negro Youth Congress. Their goal in doing so was no less than to bring democracy to the South by launching a full-scale attack on racist oppression. To advance this mission, the organization mounted right-to-vote campaigns, investigated police brutality and other abuses against black citizens, led protests against segregationist laws, and launched other forms of direct social action, with the leaders sometimes landing in jail as payment for their efforts. College-educated and strongly cognizant of the critical role education can play as a force for liberation, the organization's founders also set up classes on a wide range of topics for black sharecroppers, steelworkers, and miners.

Mrs. Jackson also worked for the Civil Rights Congress in Michigan and the National Committee to Defend Negro Leadership in New York. Reflecting both her community involvement and her academic training in sociology, in the late '50s, she worked briefly as a social worker for Girls Scouts of America, serving an impoverished area of Brooklyn, N.Y., and as educational director for the New York State Urban League.

Mrs. Jackson earned a Bachelor of Arts degree in sociology from Oberlin College in 1938 at a time when the campus, then as later, was known for its student activism. Two years later, she earned a Master of Arts degree in sociology from Fisk University, where she wrote her thesis on domestic workers in relation to trade unionism under the tutelage of Dr. Charles S. Johnson, one of the leading sociologists of the time. Upon graduation, she received a Rosenwald Fellowship to support a study on the attitudes of black youth toward World War II. She had been planning to conduct the study as part of her studies for a Ph.D. in sociology at the University of Chicago. Her life took a different turn when she opted, instead, to join the Southern Negro Youth Congress. She and James E. Jackson Jr. married in 1941, a union that was to produce two daughters.

Though Esther Cooper Jackson never became an academic, in more recent years, academe has sought her out. For nine years, she has served as a regular lecturer at a summer institute for college teachers at Harvard University, sharing her first-hand experiences as a civil rights activist in the '30s with a younger generation. She has also spoken to diverse groups at Vassar College, the University of Massachusetts at Amherst, Long Island University, and (by a remote hookup) the University of North Carolina at Chapel Hill. Scholars, writers, and filmmakers have also gravitated to Mrs. Jackson to tap her storehouse of knowledge on topics such as the antecedents to the civil rights movement of the '60s, women of the left, the impact of McCarthyism, and the legacies of W.E.B. Du Bois and Paul Robeson, two historical giants that she knew personally.

The numerous awards she has received throughout her career include a Lifetime Achievement Award from the New York Association of Black Journalists (1989); an Excellence in Journalism and Communications Award from the National Alliance of Third World Journalists (1984); a Community Contribution Award from the Harlem School of Arts (1987) for "service to the freedom and peace loving people of the world"; and a Mary Church Terrell Award from Clara Barton High School in Brooklyn (1990) for her "outstanding contributions to the African American community."

In May 2003, Esther Cooper Jackson was awarded an honorary Doctor of Humane Letters degree from the Brooklyn campus of Long Island University in recognition of her pioneering efforts as an editor and activist. And at the end of 2005, the Jacksons signed an agreement with the Tamiment Library at New York University, setting the stage for the library to preserve the couple's papers and other archival material and make them available for study, research, and public exhibition by scholars and others. To celebrate this acquisition, in October 2006, the university hosted a dinner in the couple's honor and a daylong symposium on their long careers. Papers from the symposium were collected in Red Activists and Black Freedom: James and Esther Jackson and the Long Civil Rights Revolution (Routledge, 2009), edited by scholars David Levering Lewis, Michael H. Nash, and Daniel J. Leab. To mark publication of the book, the Tamiment Library sponsored a special lecture and book signing on January 26, 2010.

During the past decade, the recognition Mrs. Jackson has received has continued to mount. On February 23, 2007, she was an honoree at an African American history celebration held in the chambers of the City Council at New York's City Hall. Exactly a month later, she was an honoree at a Women's History Month Celebration at the Schomburg Center for Research in Black Culture in Harlem. On March 25, 2008, she received recognition at a Women's History Month celebration honoring women in the arts, which was held at The Brooklyn Museum.

On January 14, 2010, she was featured in Fighting for Justice: New York Voices of the Civil Rights Movement, a film premiere and panel discussion held at New York's famed Apollo Theater that represented a collaboration among the New York City Commission on Human Rights, the Apollo Theater Education Program, and NYC Media. She was honored as one of two New Yorkers

"whose contributions helped pave the way toward progress for equal justice for African-Americans, and whose stories begin to tell about New York City's formative place in the national civil rights movement." (the other honoree was Clifford L. Alexander Jr., former advisor to President Lyndon B. Johnson and Secretary of the Army wider President Jimmy Carter.)

That same year, on March 29, she was honored at "A Phenomenal Women in Media" awards ceremony at the Von King Cultural Arts Center in Brooklyn. The award, named after community activist Hattie Carthan, was bestowed on her for her

"lifelong commitment to telling the stories of the African American experience and connecting young people to their history and legacy."

Later, on February 24, 2012, Mrs. Jackson and actress, storyteller, and activist Vinie Burrows were celebrated as "Two Who Made a Difference" at a special reception sponsored by The Brecht Forum that was held at Union Theological Seminary in Manhattan. Then, on March 22, 2014, at a preconference program for the Twelfth National Black Writers Conference at Medgar Evers College of The City University of New York, she received recognition for her "lifelong dedication to literature and freedom."

In a different arena, on October 16, 2014, Mrs. Jackson received an award from the National Domestic Workers Alliance at a conference on "Justice in the Home: Domestic Work, Past, Present, and Future." The conference at the Barnard Center for Research on Women was held almost 75 years after her ground-breaking study on improving the working conditions of black domestic workers. In bestowing the award, the event's organizers expressed their "deepest gratitude" for Mrs. Jackson's "pioneering research and enduring commitment to radical activism."

More recently, on May 8, 2015, the New York chapter of the National Organization of Black Law Enforcement Executives (NOBLE) presented her with its Presidential Trailblazer Award for her "outstanding contributions to the civil rights movement."

Mrs. Jackson was born on August 21, 1917, in what was then rural Arlington, Virginia. She was the middle daughter of Esther Irving Cooper, a stenographer, teacher, and community activist who for many years was president of the Arlington branch of the NAACP, and George Posia Cooper, who worked for the U.S. Bureau of Printing and Engraving following a career as an Army officer.

James E. Jackson Jr. died in September 2007. The couple, longtime residents of Brooklyn, had been married 66 years. In 2015, a joint biography of Mrs. Jackson and her husband, James and Esther Cooper Jackson: Love and Courage in the Black Freedom Movement, written by Sarah Rzeszutek Haviland, was published by the University Press of Kentucky.

Mrs. Jackson moved to Boston in 2015 to be closer to family, residing at Sherrill House in Jamaica Plain. She continued to be a resource for journalists and researchers working on projects related to civil rights activism. She was interviewed for a 2017 documentary film, “The Rape of Recy Taylor.” During that same year, she again lectured at Harvard for the summer institute on civil rights history. In August 2017, her 100th birthday was celebrated at the W.E.B. Du Bois Research Institute at The Hutchins Center for African & African American Research at Harvard.

She made several video presentations to commemorative conferences. Many friends, colleagues, and creative artists visited her throughout these years. Mrs. Jackson died on August 23, 2022, just after her 105th birthday.

To send flowers to the family or plant a tree in memory of Esther Cooper Jackson, please visit our floral store. 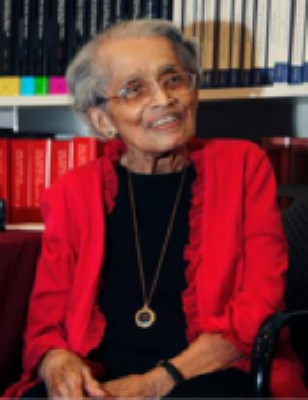 Family and friends are coming together online to create a special keepsake. Every memory left on the online obituary will be automatically included in the book.

You can still show your support by sending flowers directly to the family, or by planting a memorial tree in the memory of Esther Cooper Jackson
SHARE OBITUARY
© 2023 Davis Funeral Home. All Rights Reserved. Funeral Home website by CFS & TA | Terms of Use | Privacy Policy | Accessibility